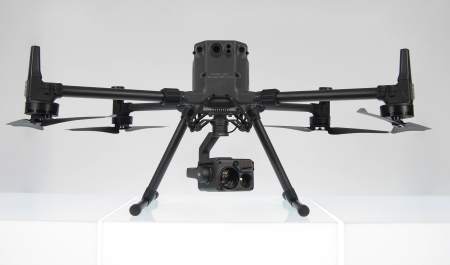 We are pleased to be one of the first in Poland to show you the latest flagship drone from the stable of DJI: Matrice 300 with a feature-rich, multi-camera observation head H20T. The first thing that strikes the eye are very solid cases for all components of the kit. One with the gimbal, one for the drone and accessories and one for the batteries. The latter is a very interesting solution - it is a combination of a smart charger and a transport case. It has 8 charging ports for the drone batteries (so 4 sets, because the M300 flies on two batteries at once), and 4 batteries for the camera. Most of the time, professionals need multiple sets of packs to get the job done, and splitting the weight into two cases (both with wheels!) certainly adds to the portability of the whole kit.

The drone makes an impressive impression from the first contact, thanks to its robustness. You can see in it years of experience in constructing flying machines. The landing gear is removable, but it cannot be folded in flight. Maybe it's for the better - that way, in a possible hard landing, the expensive gimbal is always better protected. The arms are foldable for transport, and for flight their hinge is stabilized by a large hard plastic nut, similar to those of the M200 series. The propellers are foldable and point downwards - this increases the efficiency of the motors, as the airflow thrown downwards by the propeller blades doesn't encounter any part of the drone along the way. The batteries have a mechanical, rotatable safety feature, so that even during violent maneuvers they can't accidentally dislodge. In addition, they are also equipped with standard automation for high DJI models - they have a charge indicator, temperature sensors, and the ability to self-discharge to storage voltage. 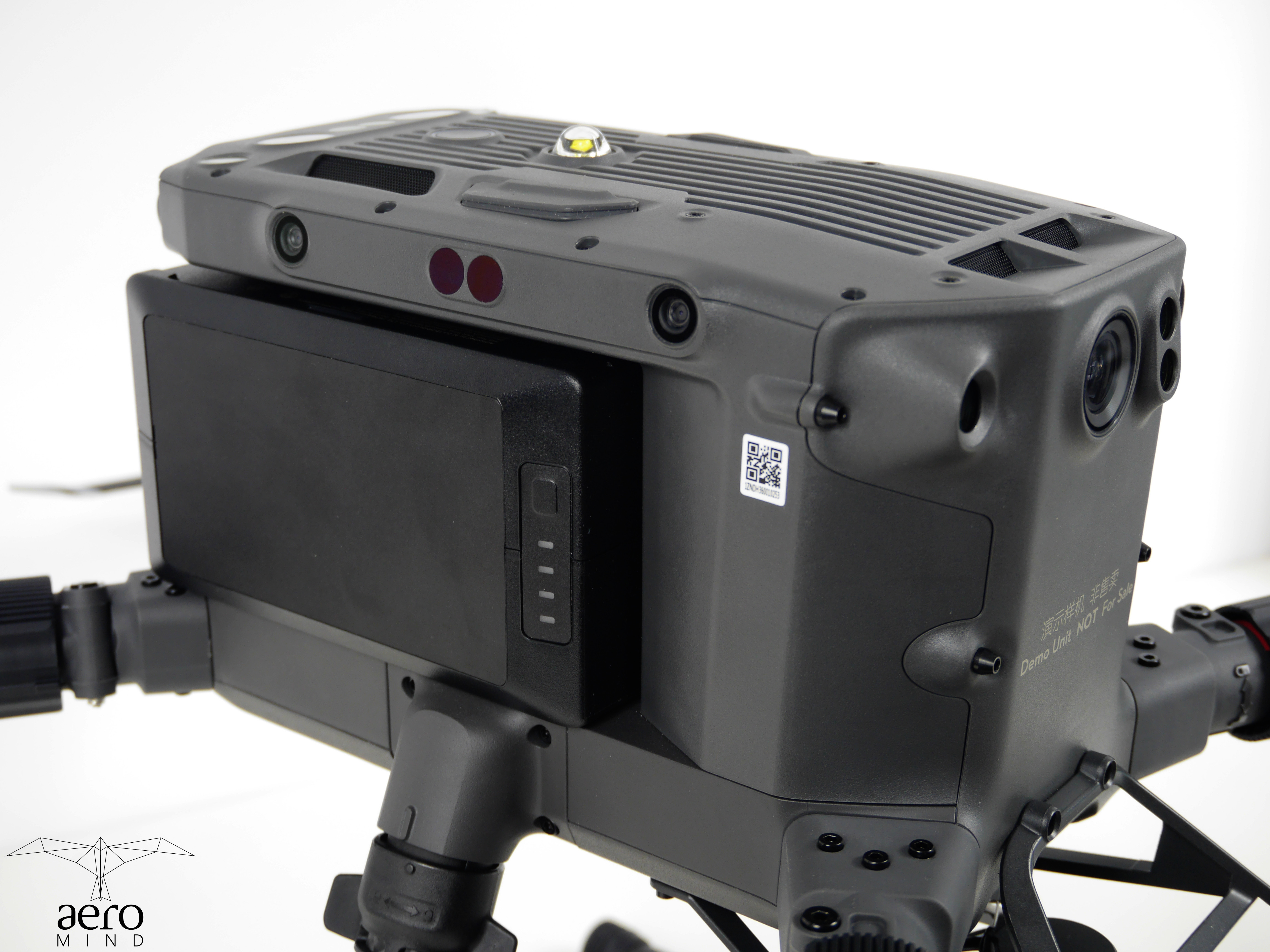 One of the first things that catches your eye is the multitude of sensors - the M300 has stereo-optical obstacle sensors and infrared distance sensors on each side (front, back sides, top, bottom). It's hard to pick it up so that you don't accidentally touch any of the mini lenses. Also, on the top and bottom, the M300 has additional lighting that automatically turns on when the environment is too dark for the optical sensors, and very bright, blinking positional lighting that can be seen from multiple sides. This machine comes standard with RTK and receives satellite signals from four GNSS systems: GPS, GLONASS, Gallileo, and BeiDou. In addition, in line with current trends in drone operations in the airspace, the M300 is equipped with AirSense, which means that it has a built-in airborne ADS-B transponder and also receives signals from such transponders in airplanes and helicopters that are in the vicinity. So if we are not alone in space, the application will notify us about it, and we will see the location of the plane on the map. However, if someone would not have enough sensors, a CMS radar (available separately) can also be installed on top of the drone. M300 is able to carry up to three payloads at once - it means that we can install two separate gimbals at the bottom of the drone and one additional one at the top. 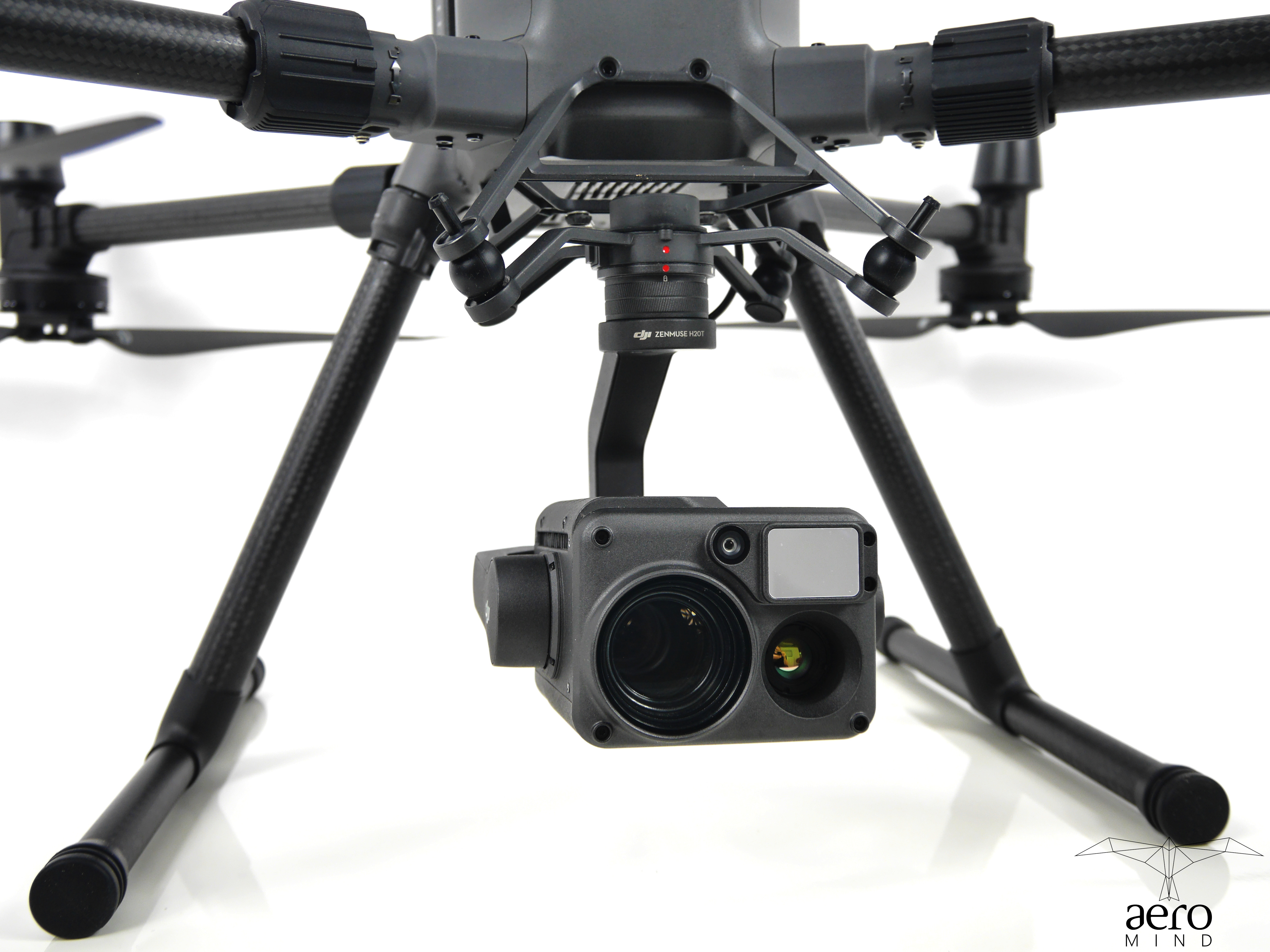 However, if someone needs to enjoy the benefits of having three different cameras at once, they don't have to resort to mounting three gimbals on the drone at all. Above we show you the highest payload model for the M300, the H20T. It is a gimbal with a built-in 20MP camera (CMOS 1/1.7") with 20x optical zoom (200x if you also count the lossy digital zoom), a 12MP wide-angle camera (CMOS 1/2.3"), a 640x512 30Hz radiometric thermal imaging camera and a laser rangefinder. But it doesn't stop there, as the drone still has a FPV camera rigidly built into the front panel with an advanced GUI that looks deceptively like the HUD from a modern military aircraft. The only thing I miss about this payload is the lack of infinite yaw rotation of the camera - the gimbal covers 740 degrees (340 degrees of yaw in each direction). 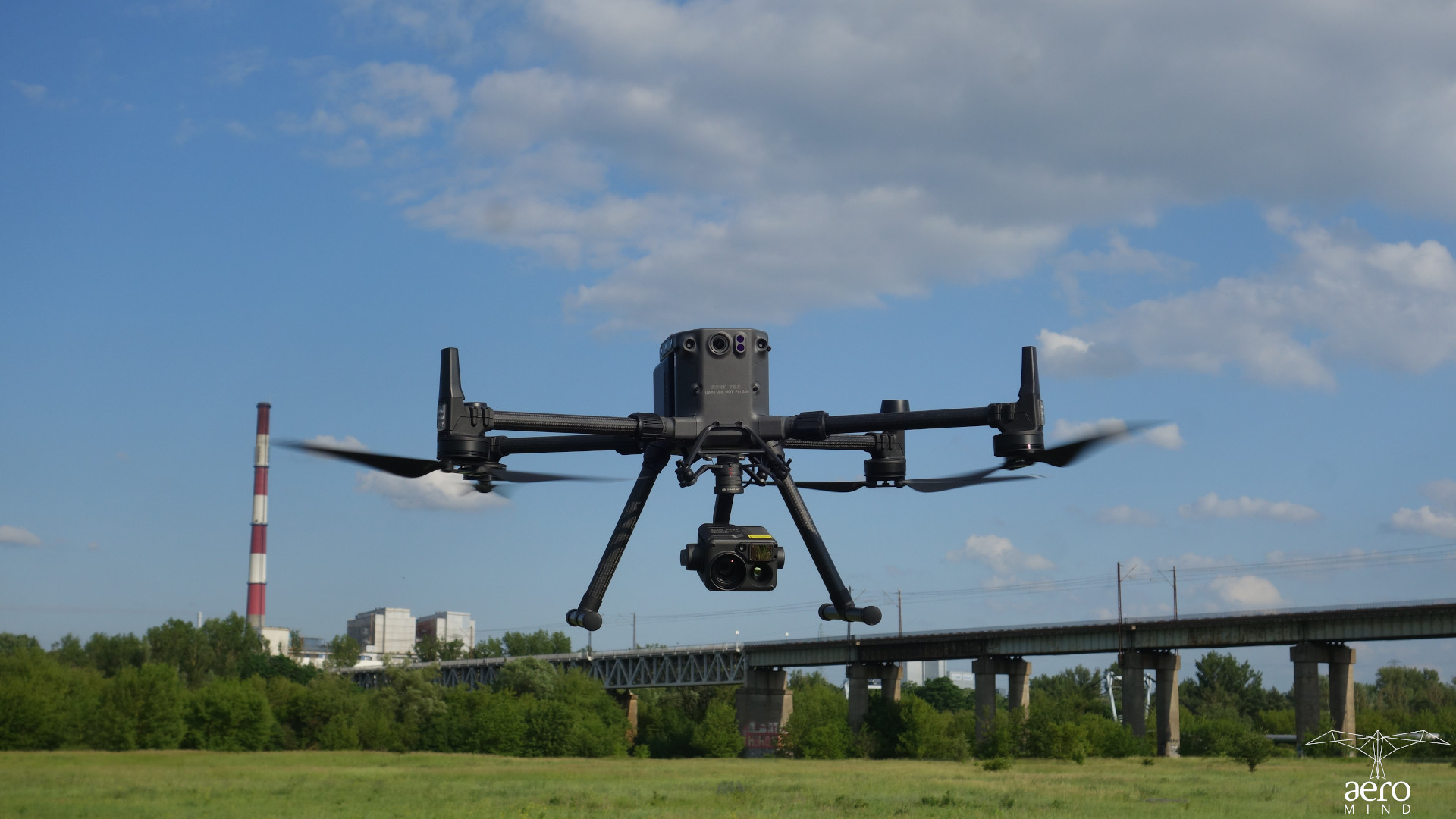 It is handy, compact and user-friendly. What is important, it has buttons and button combinations which functions can be defined by the user depending on needs and preferences. The screen is bright and there is no problem with its readability even on a sunny day (as in the photo above). A useful option is to easily take screenshots and record the contents of the screen to the camera's built-in memory. The battery is built-in, but there is also space for a removable, accessory battery, just like in the Cendence camera. The camera gives you quick access to 3 flight modes: standard Position, faster but with no obstacle detection Sport, and slow but smooth and stable Tripod. A slight disappointment for us was the lack of ATTI mode accessible from a physical switch under our finger. Still, it's good to be able to quickly switch to fully manual controls. 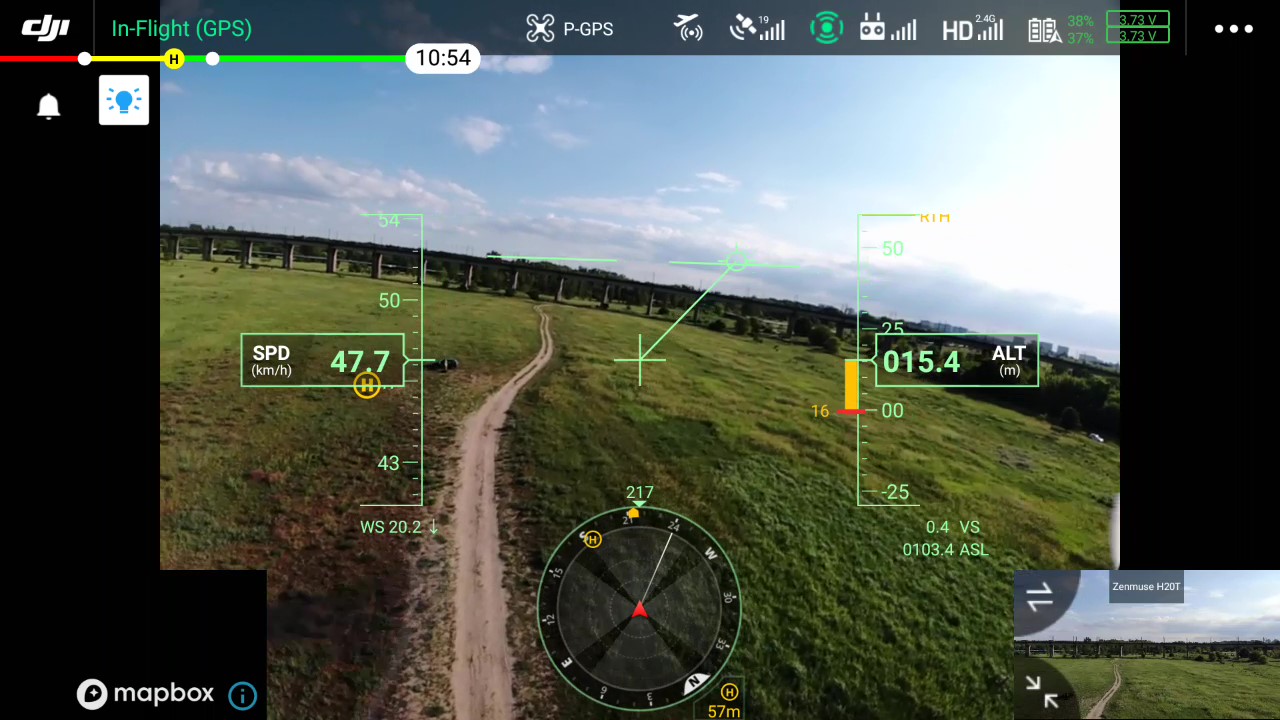 All advanced features of the drone are operated through the DJI Pilot application. The amount of options and information at first glance can be striking. In the screenshot above we see the GUI of the FPV camera view. We have at our disposal a lot of necessary information:

artificial horizon,
drone displacement vector (line coming out of the centrally placed crosshairs),
AGL altitude,
altitude from the IR distance sensor (yellow line on the right),
altitude above sea level (ASL) speed,
the projected position of the home point on the image (yellow H in a circle),
wind direction and speed (WS on the left),
thumbnail image from the gimbal (lower right corner),
direction and distance of the home point (central circle),
visualized information about the direction and distance of obstacles, and the sensor blind spots (in the circle) - at the time of the screenshot there were no obstacles, but they will be visible in one of the next screenshots

We also have a lot of interesting options available - it's impossible to list them all, but worth mentioning: Pinpoint function (clicking on a point in the camera preview shows the coordinates of that point, and its location is projected on the map), Rangefinder - which is a laser rangefinder - shows the distance, but also the coordinates of the point we are measuring, or raster photos (when we are interested in inspecting a particular detail in high resolution, we can select the area of interest on the screen, and the drone will automatically take a series of photos of this area with maximum zoom). 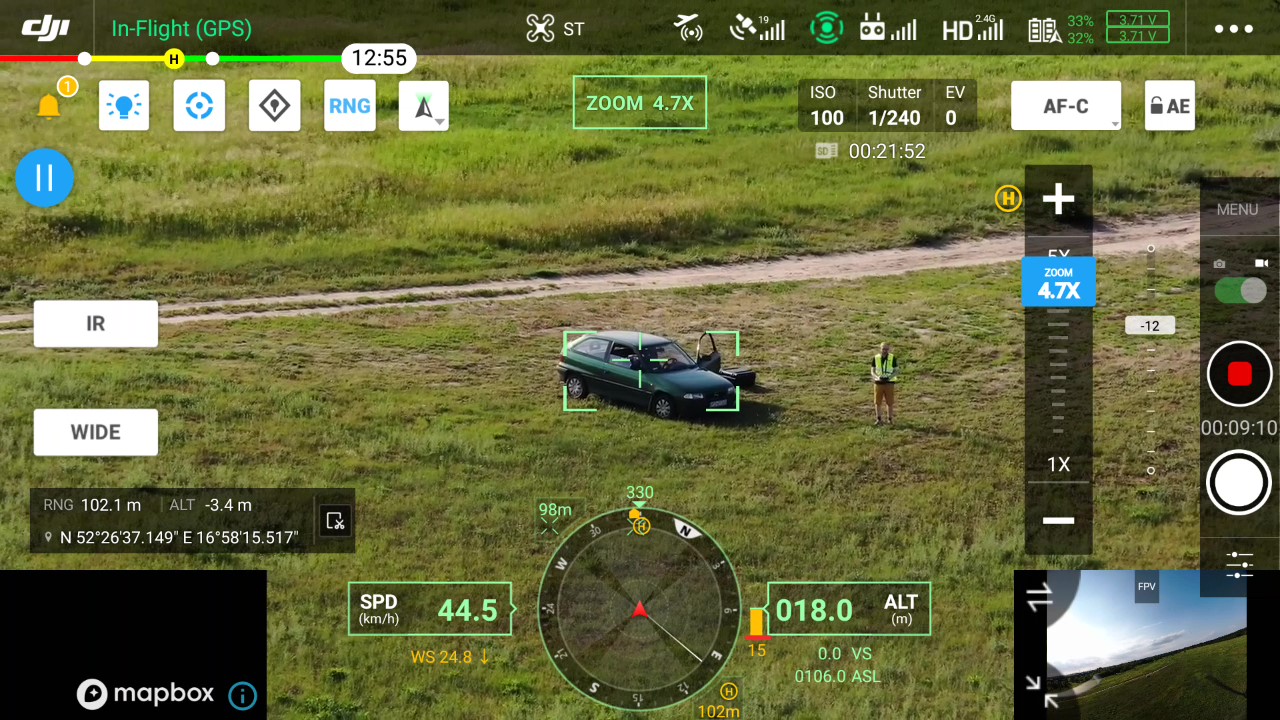 In the screenshot above, we can see Smart Track, where the gimbal automatically points towards the object under observation. In addition to this, the laser rangefinder is also enabled, and the result of the distance measurement and converted position is visible in the gray box on the left side of the screen. It is worth noting here that Smart Track works smoothly and can adjust the zoom so that the subject fills as much screen space as the user sets. 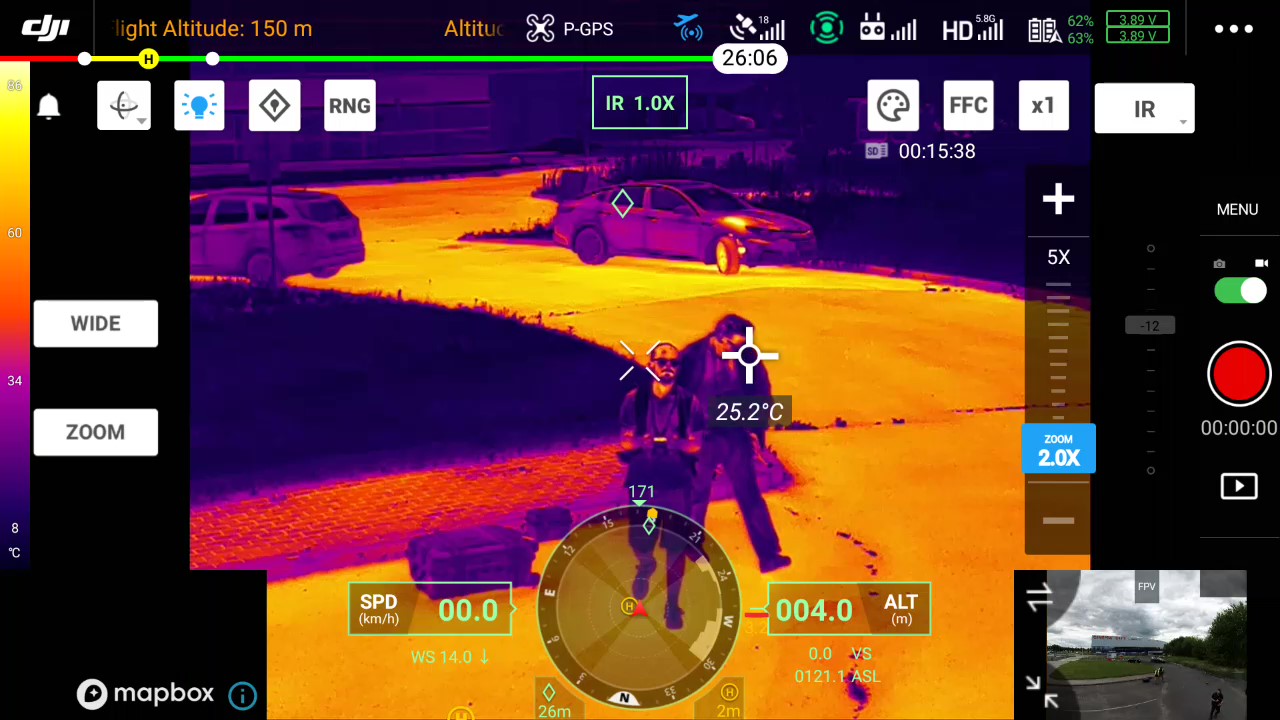 In turn, the above screenshot shows a preview of the image from the thermal imaging camera. We can see here a point measurement at a point selected by the user (a cross with the signed temperature), and a green rhombus on the car - this rhombus is a visualisation of PIN Point - that is a function in which the user clicks on any point in the camera view and the system calculates and stores its position, making it possible to read its coordinates or view the location of this point on the map. This can be a useful feature in search and rescue applications, for example. Here you can see yellow bars in a low-centered circle that show the direction and distance to the nearest obstacles. An interesting feature of the thermal camera is an option called ROI, which allows you to exclude the sky from the thermal image. This is important, because although the temperature scale can be set manually, it is usually used to automatically adjust the color palette to the temperature range of objects on the screen. So if you see the sky on the screen (which is always read as rather cold), the lower limit of the scale is lowered, reducing the detail of the thermal image. The temperature alert feature is also very useful, where if an object is detected within the camera's range that exceeds a user-defined temperature limit, an alert is displayed in the app. I imagine that, for example, firefighters inspecting burn pits and rescue workers will often use this option.

M300 in flight behaves stably and predictably, although there are some sharp brakes and spurts with which it corrects its position and speed. Flight time is impressive and exceeds 40 minutes without any problem. The maximum flight time stated by the manufacturer is as much as 55 minutes. Gimbal, despite a significant wind (7 m / s, gusts over a dozen m / s) remains stable and only at very large magnifications (100x - 200x) you can see vibrations, which should be considered normal in such wind. The gimbal also works great manually - regardless of the zoom level. Of course, being a professional drone, the M300 is equipped with autonomous flight modes - from Waypoints, to orthogonal and "oblique" mapping missions. As with other DJI drones, in order to unlock flights near airports and other restricted facilities, you'll need to send a request to the manufacturer, and the flight restriction zones themselves don't exactly coincide with those designated by the PAA. It is also worth mentioning that it is possible to change batteries without turning the drone off (one at a time), which will definitely reduce the time the drone will spend on the ground during operation.

In conclusion, the M300 as the latest product of DJI is a dream come true for every professional drone user. It is packed with useful features that are the perfect technological answer to the real problems and needs of operators, especially in technical inspections, mapping and all sorts of uniformed applications, especially since both the drone and the H20T gimbal are resistant to light rain and perform well in windy conditions. Below are photos and videos of the drone, and studio photos showing more details. 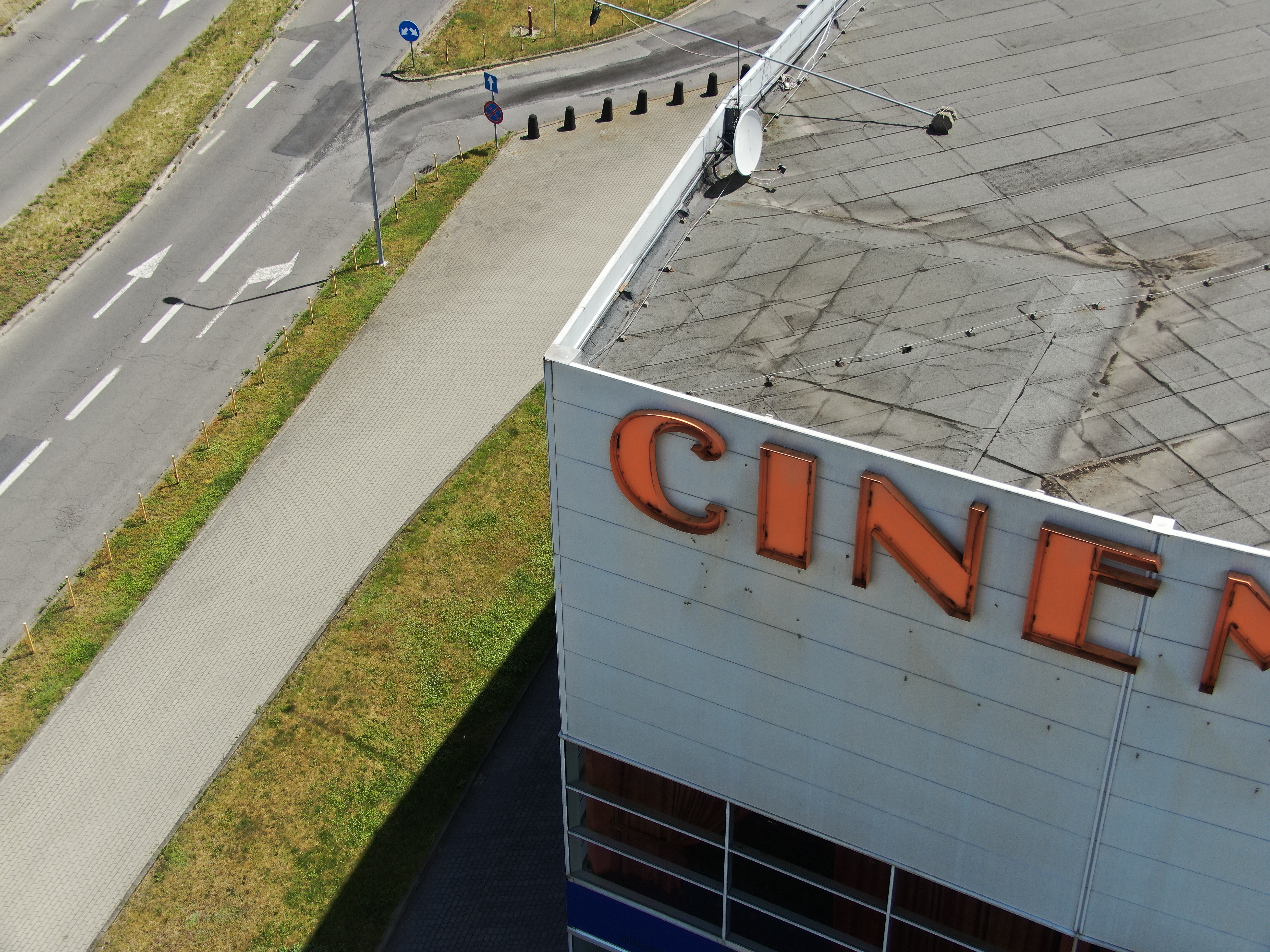 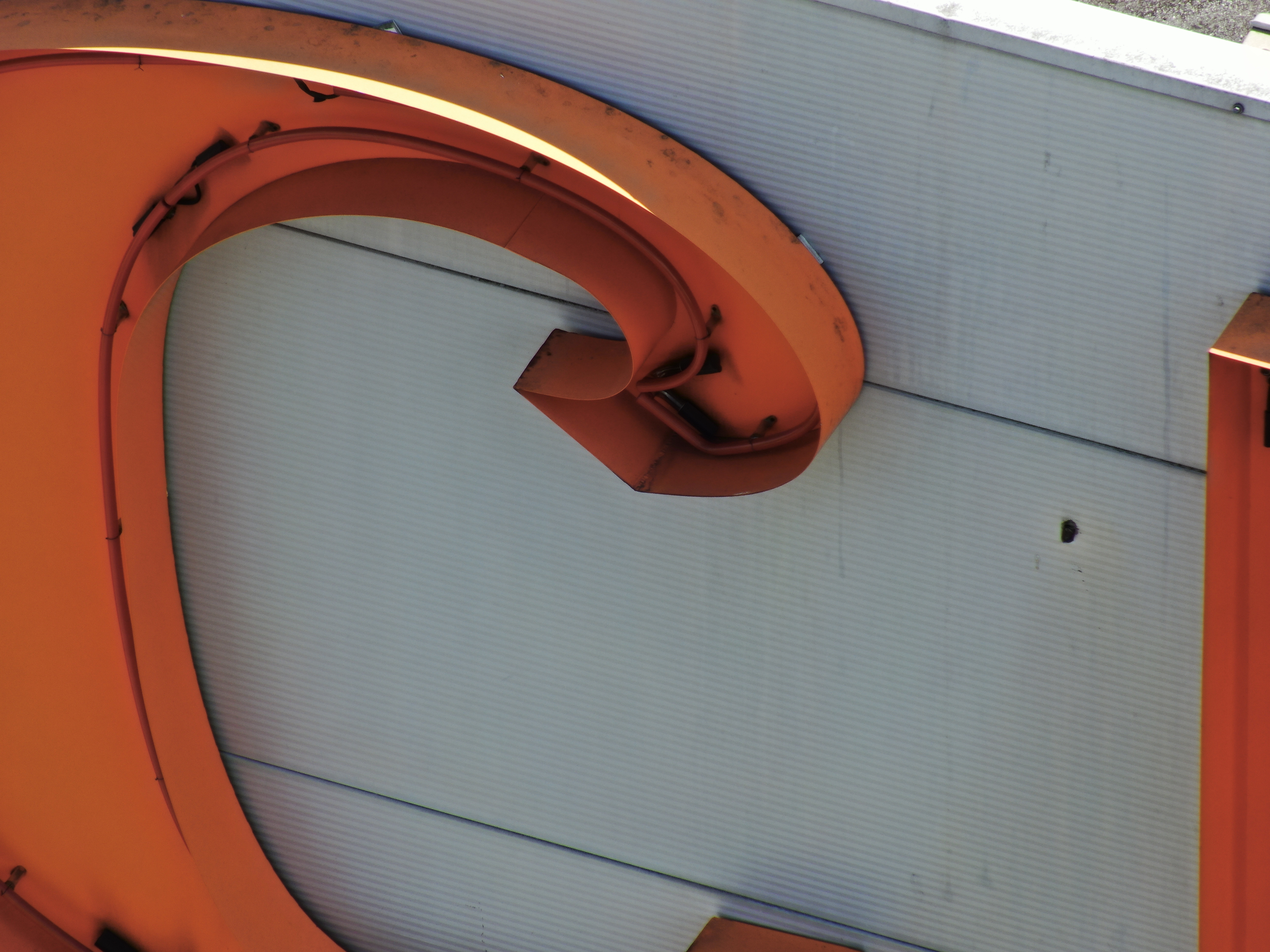