Drone incursions on prison grounds have become a persistent and threatening problem that will only get worse with time. Inmates and their accomplices will increasingly test the limits of new opportunities presented by unsecured airspace over prisons and prison staff unaware of drone presence. Without this awareness, prisons face serious consequences in terms of disrupting order and security both inside the prison and in its surroundings and wider society.

This article is based on a report by Dedrone and discusses:

the most significant drone incidents in recent prison history, and their impact

Drones are the new entry route for contraband and they face very few obstacles in their path
Drone deliveries of contraband to prisons began to be publicly discussed in the U.S. in 2013, when an organized crime group attempted to deliver cigarettes and cell phones to inmates this way. The drone was controlled from a nearby forest, using binoculars to navigate.
Drones have been used by criminals for years for reconnaissance purposes, to aid in escapes and to smuggle goods into prisons. However, the introduction of BSP detection technology allows staff to better understand their activity in the airspace, enables intrusion prevention, and helps protect the facility, inmates, and the public from hostile drones. 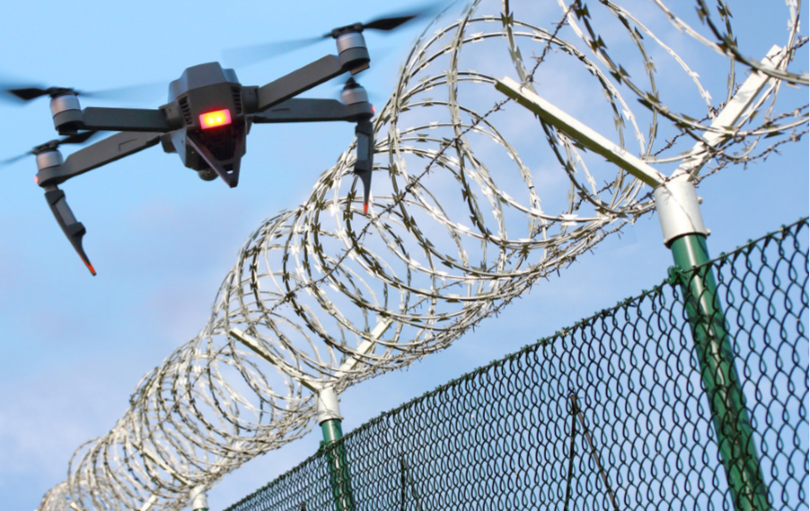 In response to the growing threat of drones in prisons, the FAA (Federal Aviation Administration, the Polish equivalent of the Civil Aviation Authority in the U.S.) began to introduce unprecedented restrictions on the ability to fly over correctional facilities. As a result, the operator of a BSP carrying contraband or illegally flying over a correctional facility can be held liable not only for smuggling, but also for violating civil aviation law. Some states, such as California, have enacted their own bans on BSP flights over correctional units, independent of federal law. This allows smuggling attempts to be prosecuted even if the illegal cargo is not found.


Drone incursions into correctional facilities are an ongoing phenomenon that will become more frequent as the popularity and availability of these devices increases. Unfortunately, some convicts will always look for weaknesses in the security of correctional units, and until the prison service seals the system from the airspace as well, attempts to exploit these weaknesses will be commonplace.
Drone sales are growing faster than ever, and users continue to find new uses for them.

Unmanned aerial vehicles were initially developed to support military operations, but over the years they have found numerous applications for civilian personal and commercial use as well. The Consumer Technology Association predicts that U.S. drone sales will reach 3.7 million units in 2018. As with any new technology, users will not only use it to solve important problems, but also for harmful and illegal purposes.

While the airspace security industry is growing tremendously, laws regarding the safe integration of drones into air traffic are catching up very slowly. Managing the airspace above prisons will become an increasingly complex issue, especially since many prisons use drones for their own purposes, such as improving inmate supervision, improving perimeter security, or inspecting infrastructure from the air. Prisons must therefore be able to quickly identify and distinguish between their own drones in their space, and harmless drones belonging to local businesses and private users, and hostile drones used with criminal intent. Without this capability, correctional facilities risk order and security inside and outside the facility. 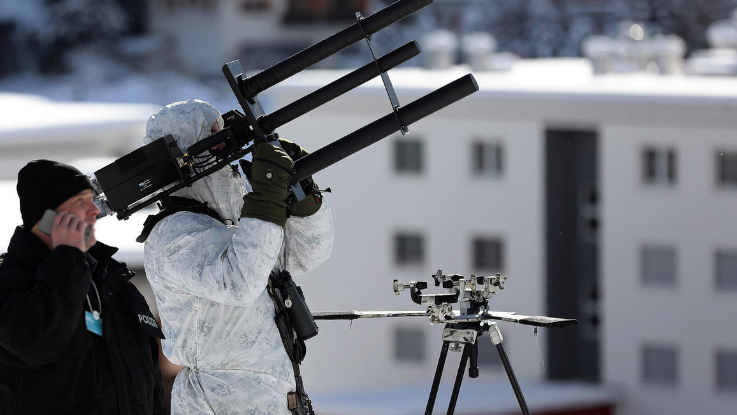 No prison is completely immune to drone incursions. Contraband unleashed from a drone can go unnoticed, which can create a danger to inmates, and unit staff. Even if the contraband does not contain weapons or dangerous tools, the mere appearance of the contraband can cause aggression among inmates and trigger fights. In addition, a drone can easily expose weaknesses in facility security, such as guard changes, areas of reduced visibility, and inmate movements.

The Ohio State Department of Corrections neutralizes a prison riot after dropping contraband from a drone.
One of the first major and widely documented prison incidents involving a drone occurred in 2015. The Ohio State Department of Corrections reported that a violent riot involving 75 inmates broke out in the prison courtyard after a drone dropped a package containing 144.5 grams of tobacco, 65.4 grams of marijuana and 6.6 grams of heroin at the location. Prison staff had to use pepper spray to regain control of the situation, and inmates had to be thoroughly searched before they were allowed to return to their cells.

The South Carolina Department of Corrections reports an escape from a maximum security prison - a drone helped.

In 2017. The South Carolina Department of Corrections reported on an incident of an inmate escaping from a maximum security prison. The investigation found that the individual used a cell phone, a makeshift mannequin (to confuse prison staff), and a critically important tool provided by a drone during the escape: a wire cutter to get the escapee through the facility's fence. In response to the escape, an extensive search operation was organized, resulting in the capture of the fugitive. A semi-automatic pistol, a shotgun, four cell phones and $47,654 in cash were found on him. 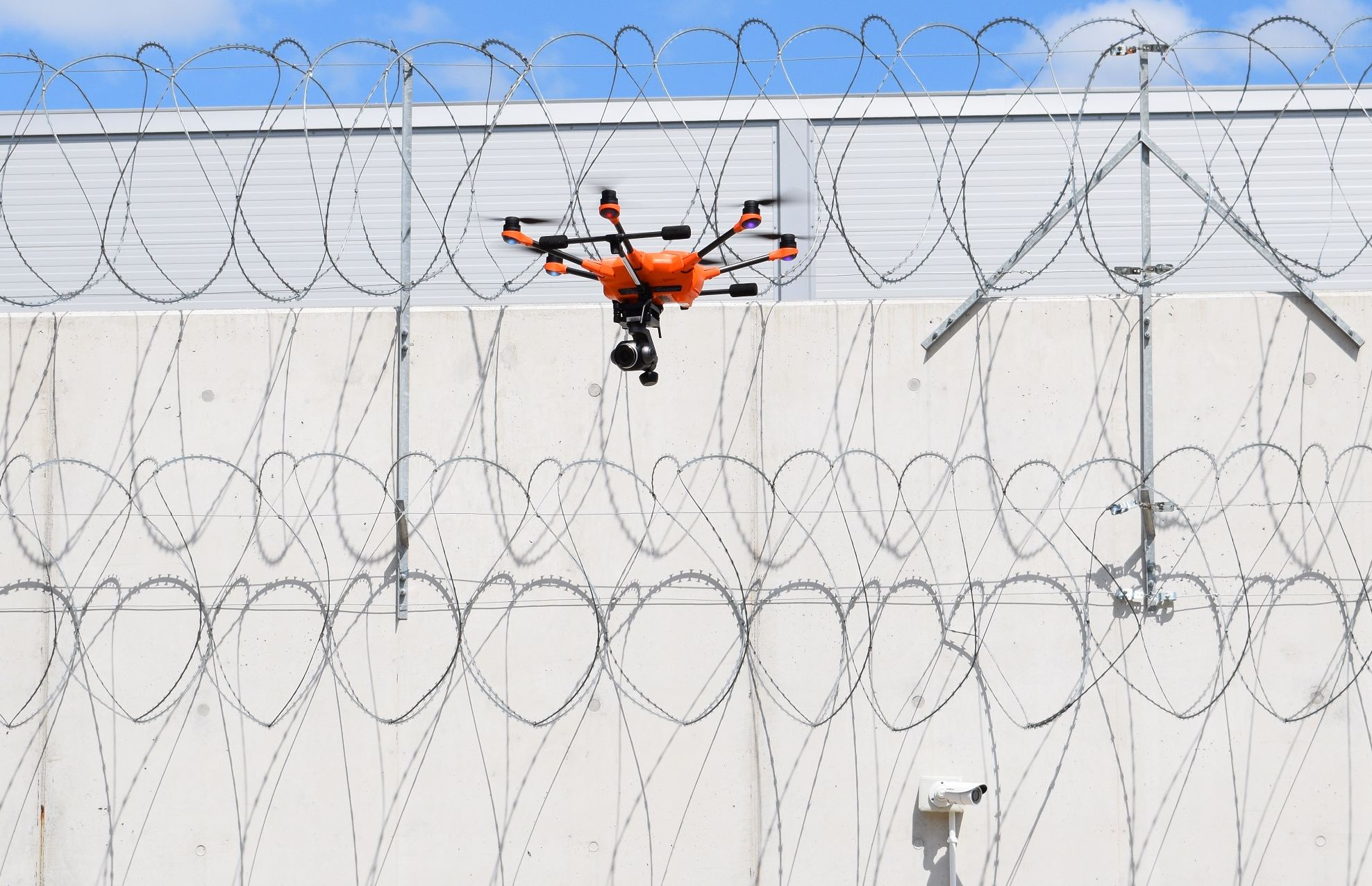 Unidentified drones were spotted over the facility before a daring escape from a French prison.

Drones track the movement of inmates, and help organized crime groups plan complex attacks on correctional units. In 2018, increased movement of unknown drones was spotted over a prison in Réau, France. A few months later, an extremely audacious action was carried out at the facility. A helicopter landed in the courtyard of the unit, from which a group of heavily armed individuals emerged and managed to free a convicted murderer, organized crime group member Redoine Faid. The group managed to return to the helicopter with the convict, after which they flew away and abandoned the helicopter north of Paris. Faid was captured several months later. Drones spotted over the Réau prison before the daring escape were used to find weaknesses in the prison's security.

A drone heading to the prison with contraband containing drugs crashed into an elementary school.

Not all drones with contraband make it to their destination, and their cargo can end up in the wrong hands, posing a danger to the community. In Canada, a drone flying with a cargo containing marijuana, tobacco, cell phones, SIM cards, lighters, and glue crashed into the roof of an elementary school. Investigators said the drone was headed toward a prison 1.6 kilometers away, but was abandoned or lost control along the way.

In the UK, members of a criminal group that delivered more than 4.5 million worth of contraband to prisons have been convicted.

Over time, operators delivering contraband are becoming more skilled and proficient. In 2017, U.K. authorities convicted members of an organized crime group involved in illegally delivering goods to prisons and helping to keep convicts in contact, with their associates at large. According to evidence found, contraband with a total value of about 4.5 million zlotys was delivered by the group over 49 illegal flights. The cargo was attached to the drone with fishing line and hooks and lowered to the cell window. The inmates used tools such as a broomstick to capture the package while the drone waited hovering above the window. 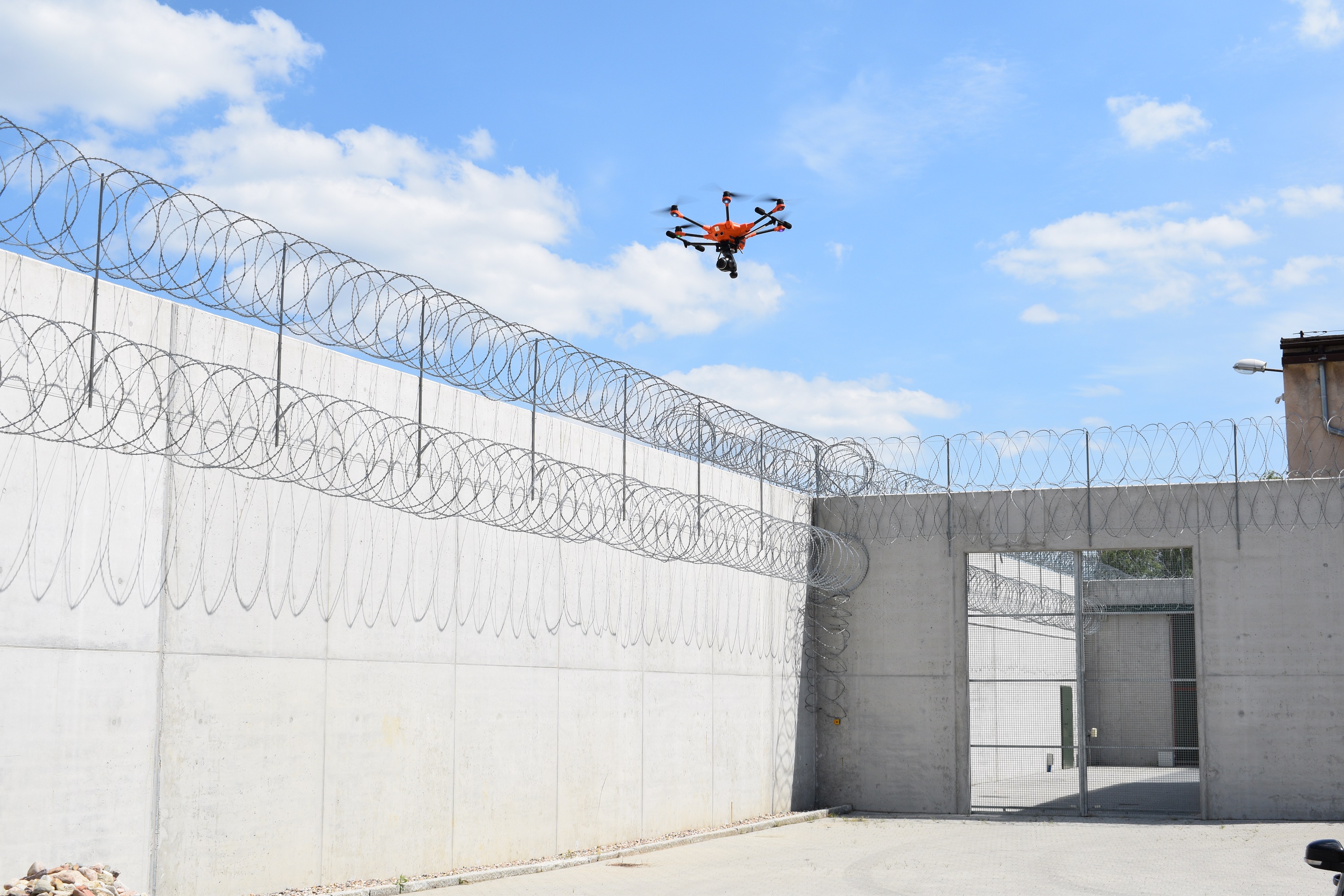 Drone detection technology plays a key role in a long-term strategy to stop the delivery of contraband by drone.

In the U.S.A., state and federal correctional facilities are arming themselves with BSP detection systems, giving them insight into not only how active drones are in their airspace, but also who is responsible for that activity.
A proactive BSP detection system is an invaluable diagnostic tool that builds strategic insight into the problem and assesses its scale. The system continuously collects information about drone activity in nearby airspace and helps translate that information into strategic decisions about security infrastructure and procedures. The correctional service can easily analyze the collected data to determine whether they are dealing with a single drone violating their airspace repeatedly or with more individual intruders. By accurately logging all BSP detections, it is also possible to see if unwanted activity increases on certain days or times of day. Such information is invaluable in identifying and prosecuting drone operators breaking the law by illegally delivering packages to prisons. Furthermore, such a system can be integrated and coupled with an already existing security system at both the software and hardware level.

With drone detection technology, correctional units can return to the lead in the race for security and order both inside and outside. You can see how the system works in practice at the Autrey Correctional Facility in Autrey, GA, U.S.A. here.

The future of prison airspace rests on its control and protection from all drone threats.

When an unwanted drone is detected, the prison service must prepare to act immediately to minimize the resulting danger. The detection of an intruder in the airspace may be grounds for a decision to raise an alarm in the facility and immediately direct inmates to their cells or even search them. If inmates themselves spot a drone with contraband, it can be very difficult to maintain control over them. However, if the drone is detected ahead of time, staff will have time to secure the area. If the drone manages to be over the premises but staff are aware of its presence, then it will be clear that the need to search and locate the contraband has arisen. The detection system gives staff a chance to react before it is too late, acting preventively and in advance.

For any correctional facility, staff safety is of utmost importance. Drones delivering contraband, spying on security weaknesses, and disrupting order certainly contribute to a decrease in security for correctional staff. Meanwhile, proactive drone detection and automated alerts can be effectively integrated into already existing security infrastructure and procedures supporting the broader security of all prisons around the world.