SD CARDS, DRONES AND MEMORIES IN 8K - EVERYTHING ABOUT SD CARDS THAT DRONE MAKERS SHOULD KNOW

Nothing in recent years has affected the pace of development of consumer optics more than drones. Just when we thought that a decent mirrorless camera that shoots movies in 4K and has a better or worse stabilised sensor is the end of the possibilities in (semi)amateur equipment, drone companies ruthlessly and without warning attacked with 8K cameras with one-inch or full-frame sensors, stabilised with three-axis gimbals. On the flank, there are also zooms of 30x or more and flying 4K mini-cameras that can be put in a pocket (like the Mavica Mini 2). In this situation, a person can only do one thing: shoot and record even more!

AS FAR AS THE CARD WILL ALLOW

– The sceptics, pessimists and believers in at least one of Murphy's Laws will add right away. Some of them have 4GB cards which allowed to take 200 photos. Others can't forget the cards that our priceless, single-copy photographs simply forgot, presenting grazing round zeros when we checked "how many more can be thrown in". Those most technically adept (in the sense of "technically advanced", not karate-kyokushin style beaten) think: as long as the recording doesn't get "cut" or "garbled". And my colleague on the left will add to this: or the pictures won't be tastefully cropped, every other one somewhere in the middle!

They are all right and wrong at the same time. They are right - because the risks are real, but they are also wrong - because we, with our knowledge (and the producers' incessant race) are able to mitigate them all almost to zero. And this is what we will be dealing with from now until the very end of this text

Inventions often outgrow their inventors - and the same has happened to our (un)beloved SD cards. When, long ago, in the younger coal age, the first SD cards were invented - nobody knew what 4K was yet. Card makers gave their inventions all sorts of names and designations - but what they all wanted from the start was a consistent and uniform speed designation. They got their imagination going, looked a hundred years into the future and decided that cards would have Speed Classes, denoted by the letter C and the numbers 2, 4, 6 and 10. C2 meant the slowest cards, i.e. those with a minimum write speed of - and here's the surprise - 2 MB/s. The other numbers were analogous. So the fastest SD cards reached, cosmic for those times, the minimum writing speed of 10 MB/s!

As we remember - it was not enough for long. Smaller and smaller cameras and camcorders with better and better sensors were processing more and more data, so the available recording speeds quickly became insufficient. It was then realised that there was something to be gained from communicating with the databanks - and that's how we got the UHS speed classes. 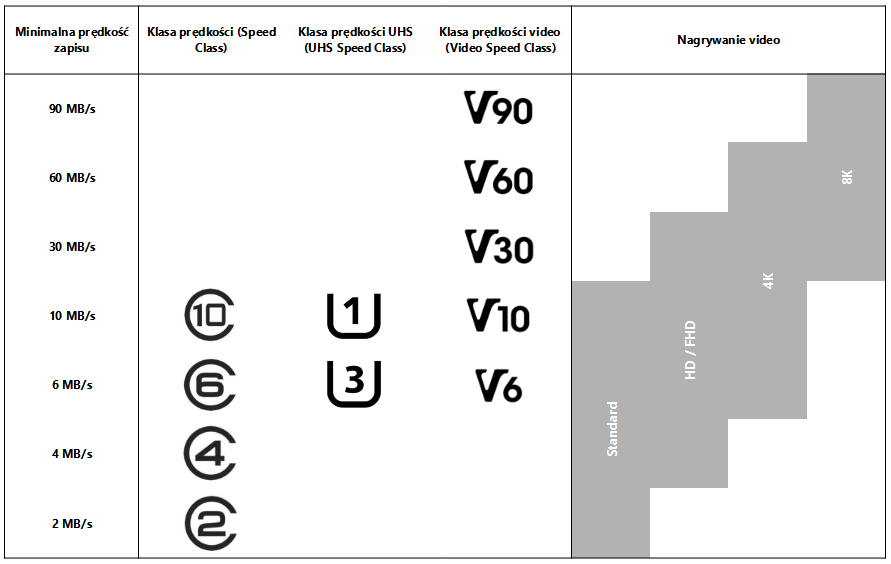 This is how SD cards with the new UHS bus came to be called. There was supposed to be one, but today there are already three (UHS-I, UHS-II and UHS-III). We can distinguish them by the I, or its multiplication, placed somewhere on the card. This will tell us that the card is more modern and... that's it. To make life more difficult for us, manufacturers have adopted other speed designations, in addition not entirely dependent on the former. So we have cards of speed U1 and U3, that is of minimal writing speed up to 10MB/s and up to 30MB/s. And they can have one of the buses (UHS-I, UHS-II and UHS-III). Is this enough? Many of you are thinking: my camcorder can record 90Mbps video! So the answer is simple: no, it is not enough.

It sounds proud, although the introduction of this speed class was more about chasing the runaway bunny and adapting to the needs of the market, rather than a new hand of... cards. Cameras recording in 4K and 8K were already starting to "frame up" with the fastest UHS cards and this state of affairs could not continue. And it was getting really bad - because customers were starting to associate SD cards with recording problems for the latest devices. And nothing could reassure them more than cards with speed class V, like video. The fastest of these - the V90 - successfully write data at 90MB/s and faster, and handle bitrates of 120Mbps and above without trouble. It seems that up to and including 8K format should be sufficient.

We can rest assured. SD card manufacturers have regained their breath and control of the situation. Today they are working on transfers of 985MB/s, 1970MB/s and 3940MB/s (SD Express cards, based on the PCIe bus), which should protect us for some time. We can temporarily not think about the speeds of SD cards - especially since we have to mention

In addition to the speed and bus type designations, there are other designations on SD cards that you should be aware of. The letters HC, XC and UC are the capacity markings. We could ignore them (after all, we know whether we're buying a 64 or 128GB card), if it weren't for the fact that they dictate the file system - or in our point of view, the way in which the card will be formatted. An unlabelled SD card can hold up to 2GB and will be formatted in the FAT system. Yes, the one used by DOS. This does not smell of speed, so let's abandon it in favour of HC (High Capacity, from 2GB to 32GB, system FAT32), XC (Extra Capacity, from 32GB to 2TB, system exFAT) and UC (of course Ultra..., from 2TB to 128TB). 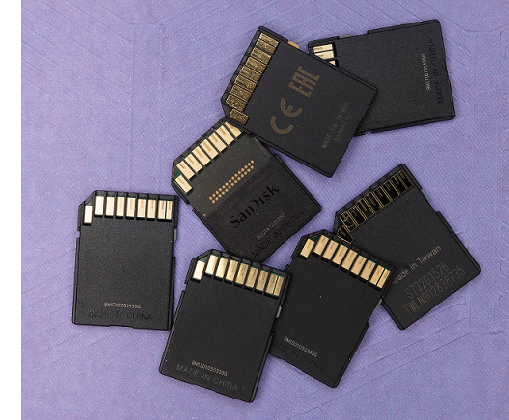 That's all you need to know about SD cards today to make an informed fit with your devices. That and what it says in our device manual. Without this knowledge, we can buy a UHS-II card and use it to no advantage in a device that accepts the UHS-I standard (the systems are downwardly compatible), or be surprised that a movie is cut into 4GB files on an HC card (4GB is the largest single file size in FAT32).

Finally, a little bonus that answers a frequently asked question: what if our device supports FAT32, and we have a 64GB or larger card? FAT32 was originally intended to support media up to 32GB, so Windows won't format it for us. However, there are tools available that can do this - just search for the phrase "fat32 format" and you will find at least a few. I personally use Raspberry Pi Imager, which is a secure tool that prepares SD cards for the Raspberry Pi. Seagate DiskWizzard is also a safe and convenient tool. With them we can format cards up to 2TB in FAT32.